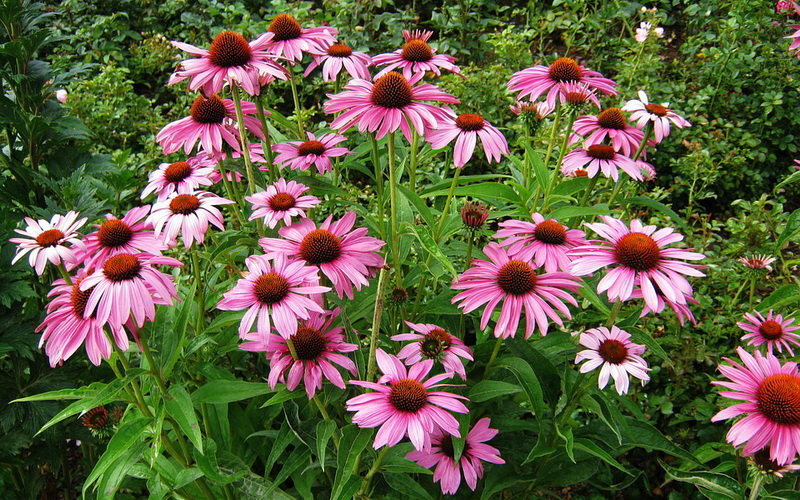 Asteraceae are also known as Compositae.

The macroscopic characteristics of Herba Echinaceae Purpureae are as described above under Description. An abbreviated description is currently unavailable.

A description of the microscopic characteristics of a cross-section of the aerial parts of the plant is currently unavailable.

A description of the powdered plant material is currently unavailable.

Echinacea purpurea is native to the Atlantic drainage area of the United States of America and Canada, but not Mexico. Its distribution centres are in Arkansas, Kansas, Missouri, and Oklahoma in the United States of America (2). Echinacea purpureahas been introduced as a cultivated medicinal plant in parts of north and eastern Africa and in Europe (9).

Macroscopic examination (2) and thin-layer chromatography and highperformance liquid chromatography (4, 10–13) of the lipophilic constituents and chicoric acid in methanol extracts.

To be established in accordance with national requirements. Normally, the maximum residue limit of aldrin and dieldrin in Herba Echinaceae Purpureae is not more than 0.05 mg/kg (16). For other pesticides, see WHO guidelines on quality control methods for medicinal plants (14) and guidelines for predicting dietary intake of pesticide residues (17).

Recommended lead and cadmium levels are no more than 10 and 0.3mg/kg, respectively, in the final dosage form of the plant material (14).

A number of chemical entities have been identified, including alkamides, polyalkenes, polyalkynes, caffeic acid derivatives, and polysaccharides (3, 5–9).

The caffeic acid ester derivative chicoric acid is the major active compound of this class found in the aerial parts of Echinacea purpurea, with a concentration range of 1.2–3.1%. Chicoric acid methyl ester and other derivatives are also present.

Structures of representative constituents are presented below.

Herba Echinaceae Purpureae is administered orally in supportive therapy for colds and infections of the respiratory and urinary tract (1, 3, 5, 7, 8, 18). Beneficial effects in the treatment of these infections are generally thought to be brought about by stimulation of the immune response (3, 5, 7). External uses include promotion of wound healing and treatment of inflammatory skin conditions (1, 3, 5, 7, 8, 9, 19).

Uses described in pharmacopoeias and in traditional systems of medicine

Uses described in folk medicine, not supported by experimental or clinical data

Current claims of the effectiveness of Echinacea purpurea as a stimulator of the immune system are based on numerous scientific studies. The immunostimulant effect is brought about by three mechanisms: activation of phagocytosis and stimulation of fibroblasts; increasing respiratory activity; and increased mobility of the leukocytes (3, 5, 8). Phagocytic activity of standardized extracts of the aerial parts of E. purpurea has been determined. A lyophylisate of the expressed juice of Herba Echinaceae Purpureae significantly increased the percentage of phagocytizing human granulocytes and stimulated the phagocytosis of yeast particles in vitro (20, 21). Inhibition of hyaluronidase activity, stimulation of the activity of the adrenal cortex, stimulation of the production of properdin (a serum protein which can neutralize bacteria and viruses), and stimulation of interferon production have also been reported after Echinacea treatments (22). The pharmacological activity of Echinacea spp. has been attributed to five component fractions in addition to the essential oil, namely the alkylamides, caffeic acid derivatives, polyalkynes, polyalkenes, and polysaccharides (7). The lipophilic amides, alkamides, and caffeic acid derivatives appear to contribute to the immunostimulant activity of the alcoholic Echinacea extracts by stimulating phagocytosis of polymorphonuclear neutrophil granulocytes (3, 23, 24). High molecular weight polysaccharides, including heteroxylan, which activates phagocytosis, and arabinogalactan, which promotes the release of tumour necrosis factor and the production of interleukin-1 and interferon beta (19, 22), have also been implicated in the activity of the aqueous extracts and the powdered drug when taken orally. The overall immunostimulant activity of the alcoholic and aqueous Echinacea extracts appears to depend on the combined effects of several constituents (3, 5, 23).

Topical applications of Echinacea extracts have been traditionally used to promote wound healing. The first published work on the mechanism of this action was by Büsing (25), who investigated the effect of Echinacea spp. on streptococcal and tissue hyaluronidase. Inhibition of tissue and bacterial hyaluronidase is thought to localize the infection and prevent the spread of causative agents to other parts of the body. In addition to the direct antihyaluronidase activity, an indirect effect on the hyaluronic acid–hyaluronidase system has been reported (26). Stimulation of new tissue production by increasing fibroblast activity, and stimulation of both blood- and tissue-produced phagocytosis, appear to be involved in this mechanism (26). The polysaccharide fraction (echinacin B) appears to promote wound healing by forming a hyaluronic acid–polysaccharide complex that indirectly leads to the inhibition of hyaluronidase (27).

In in vitro experiments, an ethanol extract (65% by volume) of Herba Echinaceae Purpureae inhibited the contraction of collagen by mouse fibroblasts, measured by the collagen lattice diameter (28).

Purified polysaccharides isolated from large-scale cell cultures of E. purpurea enhanced the spontaneous motility of human polymorphonuclear leukocytes under soft agar and increased the ability of these cells to kill Staphylococcus aureus. Human monocytes were activated to secrete tumour necrosis factor alpha, interleukin-1, and interleukin-6 while the expression of class II human leukocyte antigens was unaffected (32).

For purified caffeic acid derivatives, antiviral activities have been demonstrated (33). Incubation of vesicular stomatitis virus (VSV) with 125µg/ml of chicoric acid for 4 hours reduced the number of viral particles in mouse L-929 murine cells by more than 50% (34).

Recently 26 controlled clinical trials (18 randomized, 11 double-blind) were systematically reviewed in Germany (24), Nineteen trials studied the prophylaxis or curative treatment of infections, four trials studied the reduction of sideeffects of chemotherapy, and three investigated the modulation of specific immune parameters. The review concluded that Echinacea-containing preparations are efficacious immunomodulators (24). However, it also concluded that there was insufficient evidence for clear therapeutic recommendations as to which preparation or dosage to use for a specific indication (24).

A large-scale longitudinal trial (4598 patients) studied the effects of an ointment containing a lyophylisate of the expressed juice of Herba Echinaceae Purpureae. The ointment was used to treat inflammatory skin conditions, wounds, eczema, burns, herpes simplex, and varicose ulcerations of the legs (19). Therapeutic benefit from the ointment was observed in 85.5% of the cases. The treatment periods ranged from 7.1 to 15.5 days (19).

Allergy to the plant.

Should not be used in serious conditions such as tuberculosis, leukosis, collagenosis, multiple sclerosis, AIDS, HIV infection, and autoimmune disorders. Echinacea preparations should not be administered to people with a known allergy to any plant of the Asteraceae (1).

Internal or external use should not exceed a period of 8 successive weeks (1).

Mutagenicity and carcinogenicity test results were negative (3, 5, 35). Doses up to a polysaccharide concentration of 500 mg/ml caused no increase in sister chromatid exchange or structural chromosome aberrations (35).

There are no reliable studies on this subject. Therefore, administration of the drug during pregnancy is not recommended (1).

There are no reliable studies on this subject. Nursing mothers should not take the drug without consulting a physician (1).

Oral administration of Echinacea preparations is not recommended for small children, except on the advice of a physician. Herba Echinaceae Purpureae may be used for external treatment of small superficial wounds.

Occasionally allergic reactions may occur owing to allergy to plants in the Asteraceae (Compositae).