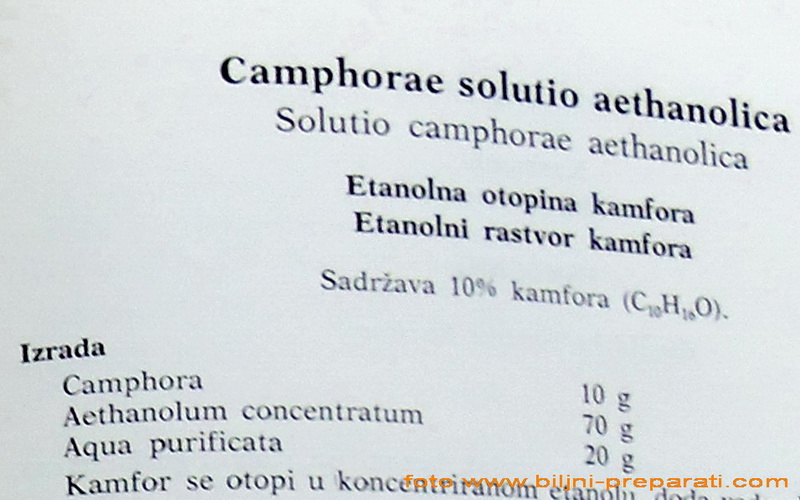 Camphor used to be made by distilling the bark and wood of the camphor tree. Today, camphor is chemically manufactured from turpentine oil. It is used in products such as Vicks VapoRub.

Camphor products can be rubbed on the skin (topical application) or inhaled. Be sure to read the label to find out how the product should be administered.

People use camphor topically to relieve pain and reduce itching. It has also been used to treat fungal infections of the toenail, warts, cold sores, hemorrhoids, and osteoarthritis.

Camphor is used topically to increase local blood flow and as a “counterirritant,” which reduces pain and swelling by causing irritation. It is important not to apply camphor to broken skin, because it can enter the body quickly and reach concentrations that are high enough to cause poisoning.

Some people use camphor topically to treat respiratory tract diseases and to treat heart disease symptoms. Camphor is also used topically as an eardrop, and for treating minor burns.

Some people inhale camphor to reduce the urge to cough.

Although it is an UNSAFE practice, some people take camphor by mouth to help them cough up phlegm, for treating respiratory tract infections, and for intestinal gas (flatulence). Experts warn against doing this because, when ingested, camphor can cause serious side effects, even death.

Camphor is a well-established folk remedy, and is commonly used. Camphorated oil (20% camphor in cottonseed oil) was removed from the U.S. market in the 1980s because of safety concerns. It continues to be available without a prescription in Canada.

How does it work

Camphor seems to stimulate nerve endings that relieve symptoms such as pain and itching when applied to the skin. Camphor is also active against fungi that cause infections in the toenails.

CAMPHOR USES & EFFECTIVENESS What is this?

Cough.Camphor is FDA-approved as a chest rub in concentrations less than 11%.

Pain. Camphor is FDA-approved for use on the skin as a painkiller in concentrations of 3% to 11%. It is in many rub-on products for cold sores, insect stings and bites, minor burns, and hemorrhoids.

Osteoarthritis. A rub-on cream containing camphor, glucosamine sulfate, and chondroitin sulfate seems to reduce the severity of symptoms of osteoarthritis by about half. Researchers believe it is probably the camphor, not the other ingredients, that relieves the symptoms.

Toenail fungus (onychomycosis). Preliminary research suggests that camphor, in combination with lemon eucalyptus oil and menthol, applied to the toenail area, might be useful for treating toe nail fungus. Applying chest rub products containing camphor such as Vicks VapoRub to affected toenails daily until the infected nail grows out appears to clear fungal nail infections in some people.

Low blood pressure after standing up. Early resrach suggests that taking a specific product containing camphor and hawthorn (Korodin-Herz-Kreislauf-Tropfen) by mouth helps prevent big drops in blood pressure upon standing. However, it is not clear if taking camphor alone provides the same benefits, and this product is not available in the US.

More evidence is needed to rate the effectiveness of camphor for these uses.

Camphor is LIKELY SAFE for most adults when applied to the skin in a cream or lotion in low concentrations. Camphor can cause some minor side effects such as skin redness and irritation. Do not use undiluted camphor products or products containing more than 11% camphor. These can be irritating and unsafe. Camphor is also LIKELY SAFE for most adults when inhaled as vapor in small amounts as a part of aromatherapy. Don’t use more than 1 tablespoon camphor solution per quart of water.

Do not heat camphor-containing products (Vicks VapoRub, BenGay, Heet, many others) in the microwave. The product can explode and cause severe burns.

Camphor is POSSIBLY SAFE when applied to the skin in higher concentrations for a short time.

Camphor-containing products are LIKELY UNSAFE when applied to broken or injured skin. Camphor is easily absorbed through broken skin and can reach toxic levels in the body.

Camphor is UNSAFE when taken by mouth by adults. Ingesting camphor can cause severe side effects, including death. The first symptoms of camphor toxicity occur quickly (within 5 to 90 minutes), and can include burning of the mouth and throat, nausea, and vomiting.

Children: Camphor is POSSIBLY UNSAFE in children when applied to the skin. Children tend to be more sensitive to the side effects. Camphor is definitely UNSAFE when taken by mouth. Seizures and death can occur if these products are eaten. Keep camphor-containing products away from children.

Liver disease: Taking camphor by mouth or applying it to the skin have been linked to potential liver damage. In theory, using camphor might make liver disease worse.

CAMPHOR INTERACTIONS What is this?

We currently have no information for CAMPHOR Interactions

The following doses have been studied in scientific research:

APPLIED TO THE SKIN:

For pruritis and pain: A 3% to 11% ointment is typically used three to four times daily.

For cough: A thick layer of 4.7% to 5.3% camphor ointment is applied to the throat and chest. The area may be covered with a warm, dry cloth or left uncovered.

For osteoarthritis: A topical cream containing camphor (32 mg/g), glucosamine sulfate (30 mg/g), and chondroitin sulfate (50 mg/g) as needed on sore joints for up to 8 weeks.

One tablespoon of solution per quart of water is placed directly into a hot steam vaporizer, bowl, or washbasin. Sometimes 1.5 teaspoons of solution are added to a pint of water and boiled. The medicated vapors are breathed. This inhalation may be repeated up to three times a day.